I learnt the hard way that June is “not the time” to visit Hanoi (which is October, apparently). I had arrived in the early stages of the wet season, and was met with a tropical monsoon on the way to my Airbnb. As my taxi’s wheels slipped and fought aimlessly with the mud path it had occurred to me that booking a place in Long Bien district, away from the city’s centre, wasn’t the greatest idea for a first time visitor. After five minutes of rain, finding my obscure homestay through a blurred screen of water had become nearly impossible.

The cab driver looked back at me, scratching his head. He then apologetically said something that sounded a lot like “oh my god”.

The car inched a little further, then jolted to a stop, flinging my luggage around the boot. The driver had spotted a rain-drenched silhouette illuminated by headlights and frantically rolled down his window to enter into a rapid-fire exchange, after which we were on our way again. After a turn here and another one there, the rusted gate of my homestay emerged through an entanglement of weeds, looking strangely abandoned.

Although disconcerting at the time, it’s this abandoned aesthetic that makes most of Hanoi so romantic. Many remnants of French colonial rule have surprisingly survived the course of war, leaving behind flaking, cream pillars and snaking vines. But Hanoi is far from being deserted: a steady stream of traffic ebbs and flows through all the narrow alleyways in Old Quarter accompanied by the traveling whine of motor-engines. The peeling, pastel doorways are often adorned with a cluster of plastic stools, always with a few regulars perched on-top sipping on Vietnamese black coffee, but sometimes Bia Hà Nôi (Hanoi Beer) tinkling with ice-cubes.

My host’s home was beautiful, yet odd—the stuff of furniture store dreams: a hundred-year-old house fitted with antique French windows overlooking a bonsai garden. The patterns in the bonsai garden’s gravel would change every day according to the host’s whimsy. The day I left, it had a golf ball peculiarly perched in its center.

An element of authenticity and eccentricity seems to be what captures the hearts of most curious travelers and you can feel it everywhere. I didn’t have a single bad meal in Hanoi because the food is not made to be instagrammed (God knows I tried); it’s made to be relished on a rickety wooden table under which the floor is littered with lime peels and toothpicks.

Hanoi is unbridled and wild, constantly growing at an uncontrollable rate and swallowing up neighboring towns. This means that the high-pitched chirping of cicadas on the other side of my shower probably won’t last, and that though the seasonal timing of my trip wasn’t perfect, visiting Hanoi as it lies on the cusp of change is something one can’t put off forever. The run-down urban jungle won’t have a sea change in the next year or so, but something subtle, something intangible will undoubtedly be lost over the course of time. 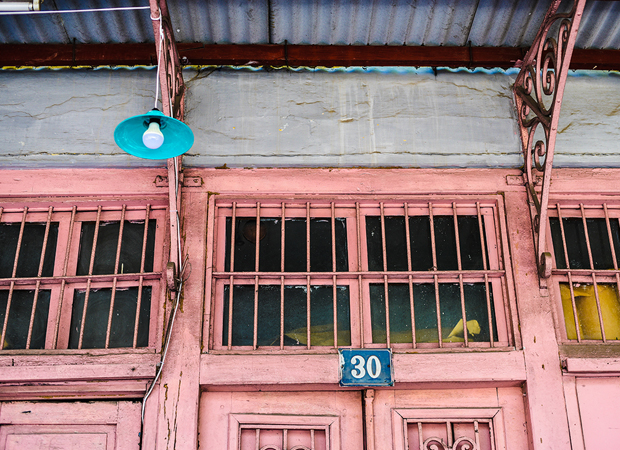 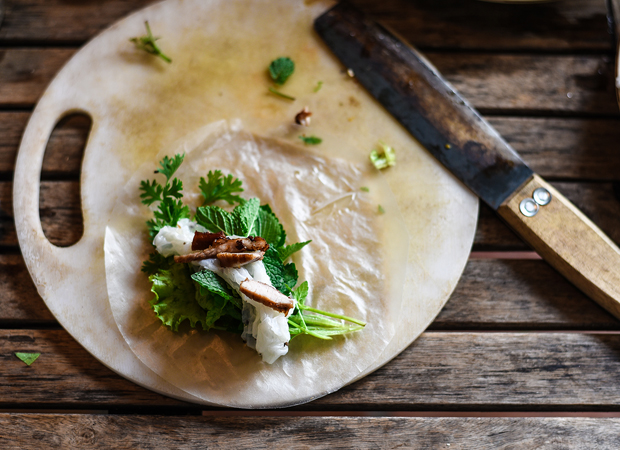 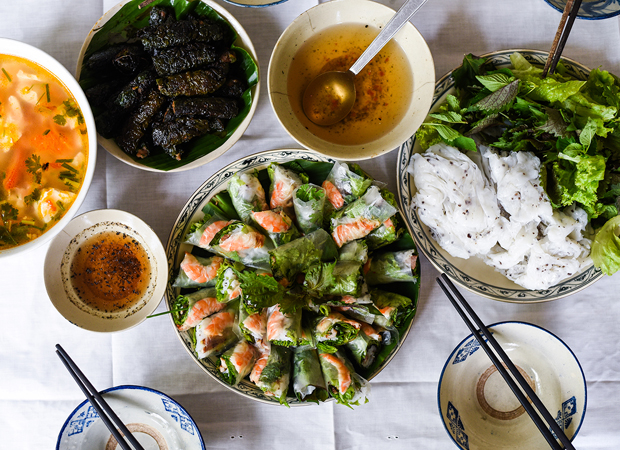 **The national dish is abundant in many street stalls and shops in Hanoi, all which will vary in recipe but not too much in quality. Pho Thin stands out in particular for its aromatic, savory broth. They also serve the noodles with an extremely generous amount of herbs and spring onions, leaving the bowl fresh and fragrant. One bowl is 50,000 dong ($2.29 USD).

This is a dish that inspires adoration in its simple preparation and complex flavours: a humble mix of fresh herbs, rice vermicelli, grilled fatty pork (chả) or super-fat spring rolls (nem), and a slightly sweet dipping sauce. Bun Cha Nem Cua Be Dac Kim is frequently recommended for their authenticity and consistency. *One serving is 60,000 dong ($2.75 USD).

Chim Sao is the kind of restaurant that instantly summons a sense of calm nostalgia, even if you are a first time visitor to Hanoi. It’s delightfully unassuming, quaint, and quirky with its “no-shoes” policy and low tables – and the local dishes are artfully made with delicate seasoning. Chim Sao is tucked away in a street not too far from the Old Quarter, although it’s best to take a taxi there. Dinner for two was roughly 450,000 dong ($20 USD).

Casual remnants of Hanoi’s French occupation can be found at La Badiane, which is situated in an old colonial house with a charming courtyard. Here, one can enjoy classic French dishes (involving mains such as duck, lamb, or foie gras), with an occasional hint of Vietnamese influence. Dinner for two was roughly 1,000,000 inclusive of wine ($45 USD). 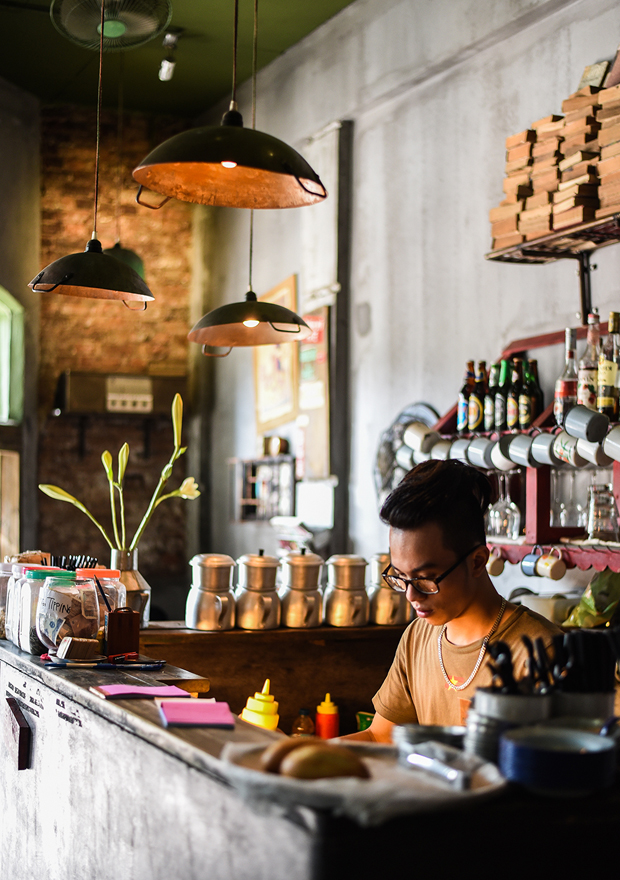 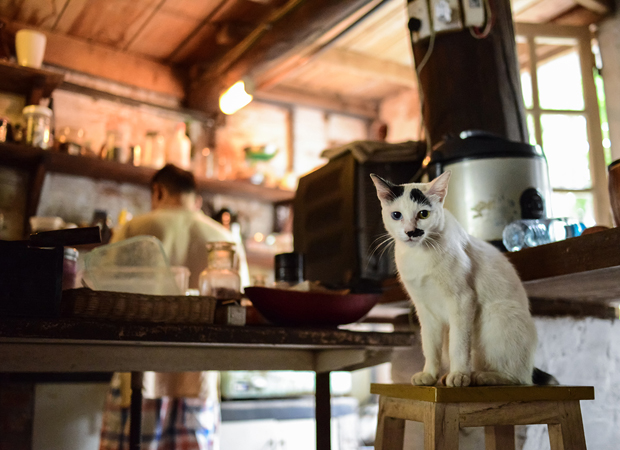 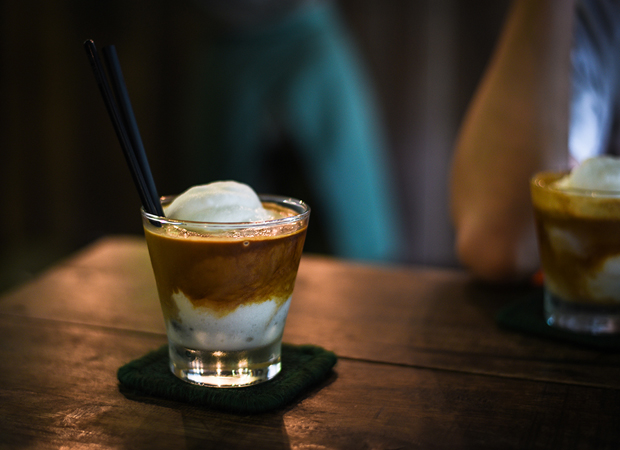 Hanoi is a utopia for coffee nerds. Locals usually point to Coffee Street or Hang Hanh and suggest you follow your gut instincts, but also your eyes (“go where people are”). However, there are a few places that brew coffee so good it should be illegal.

Their coffee dripped over frozen coconut cream is reason alone to hop on a plane to Hanoi. In the mid-summer heat, you may find yourself revisiting Cong Caphe an embarrassing number of times. The tongue-in-cheek communist propaganda decor and rustic interior also make it a great place for curiosity-lovers to enjoy a morning people watching. One coffee smoothie is 45,000 dong ($2 USD).

Stop by Hanoi Social Club for a velvety rich Vietnamese drip or cà phê đá – all while seated in a colorfully decorated 1920’s French colonial villa. The café’s Melbourne-based owner has also introduced a little bit of home in his simple menu, which is filled with vegetarian options and freshly blended smoothies. One coffee is roughly 50,000 VND ($2.30 USD)

Those looking to stock up on some local beans or “weasel coffee” look no further than the small family business Cafe Mai. This locally recommended café serves up a life-changing “weasel coffee” made from the dung of civet cats, but without the whole dung of civet cats part. Café Mai uses artificial fermenting methods which allow for the experience of super smooth and cacao-y coffee at a fraction of the price. One cup is 55,000 VND ($2.70 USD).

Possibly the best-worst kept secret in Hanoi, this café is tucked behind a silk shop and is composed of a number of winding staircases adorned with birdcages and old mirrors which lead to a panoramic view of Hoan Kiem Lake. A steady stream of locals and tourists will come and go, but the place still remains quietly romantic and tranquil. Switch up your morning coffee for caphe trung da, iced coffee topped with beaten egg white so silken it looks like cream. One cup is 35,000 VND ($1.60 USD). 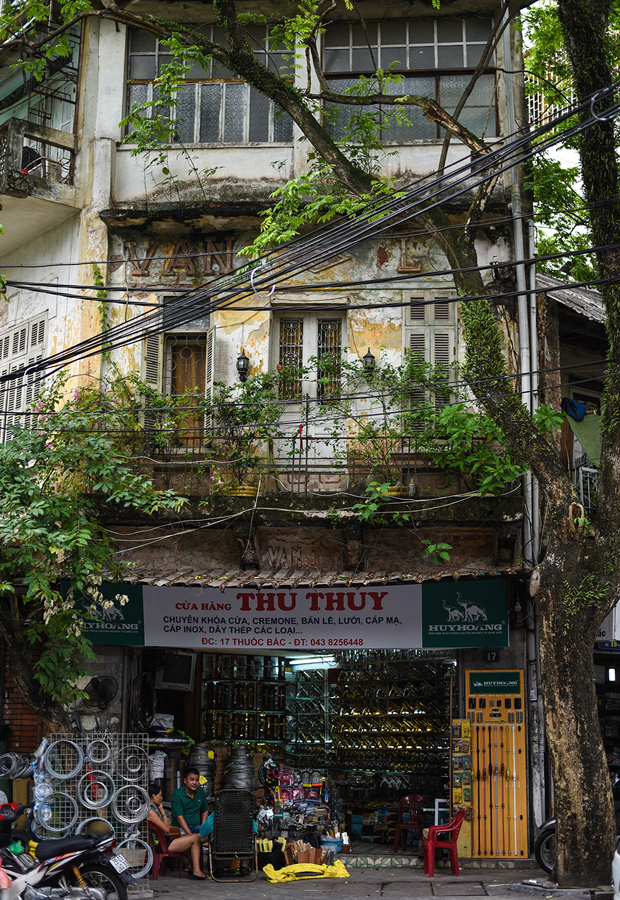 Old Quarter is composed of a crisscross of streets which are differentiated by artisan guilds: beautiful hanging silks one second and rows upon rows of bamboo poles the next. Wander through this dizzying labyrinth and you’ll be sure to find a little piece of Hanoi that resonates with you.

Raw silk production is a rapidly growing industry in Vietnam, and the effect of this can be seen in a various tailors and silk merchants peppered throughout Hanoi. If you decide to get a few garments copied or varied, this is a tailor store that will not just get it right in 24 hours, but make wardrobe staples that last. Their silk is sourced from high-quality producers and villages across Vietnam and their tailoring skills are excellent. Prices will vary depending on garment and fabric, but for measure a silk-lined dress was 50 USD which is a little higher than usual.

X98 is a sprawling faux-industrial conclave of local fashion stores, bars, and restaurants – all housed in an abandoned old factory. Ever since Hanoi’s first independent cultural complex Zone 9 was shut down in 2014, the original founders have been trying to resurrect that spontaneous artistic atmosphere in a new location. X98 opened late last year and doesn’t seem completely populated yet with stores, but it’s still worth a visit for local menswear brand Zero Studio and local womenswear brand Merceria.x98. 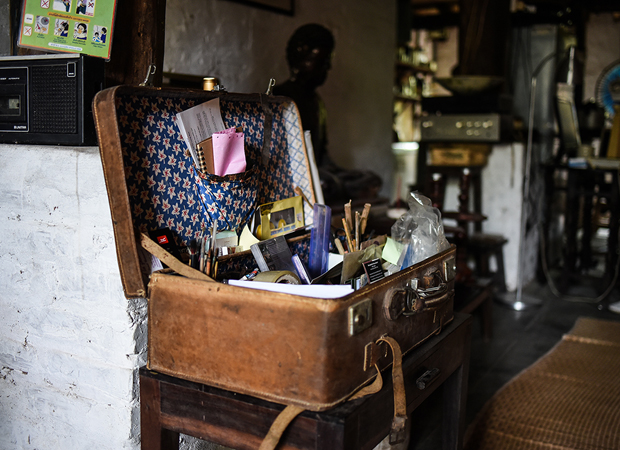 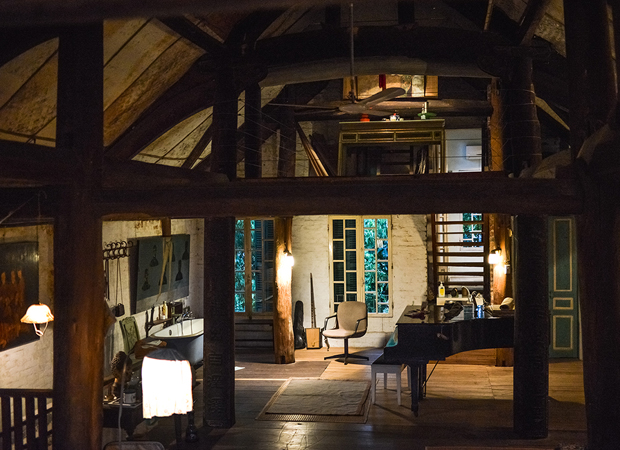 This cooking class with the restaurant’s owner, Phuong, and her mother is not your typical tourist trap. You’ll find yourself cycling with Phuong to the wet market in the morning, picking fresh herbs from her garden, and awkwardly apologizing to her mother despite the language barriers for being so bad at peeling vegetables. You will, however, have some super delicious dishes to serve up back at home. One class is 40 USD per person.

Take a morning to cycle around the 10 mile length of West Lake, and watch people swim, fish, and stare pensively into this massive body of water. In a small island in the middle of the lake, you will find Trấn Quốc Pagoda, the oldest pagoda in Vietnam. Half day rental is 50,000 VND ($2.30 USD).

This world heritage site includes around 1,600 limestone islands and islets dotted over emerald waters. It is unbelievably scenic and worth a day-trip, but inevitably crowded. There are no shortage of organized tours from Hanoi, but if you’re up for a bit of adventure rock climbing and kayaking is also an option. It is suggested that you avoid the “tourist port” altogether, and cross from another port due to the poorly organized trips on agonizingly slow boats coupled with hard-sell stops. 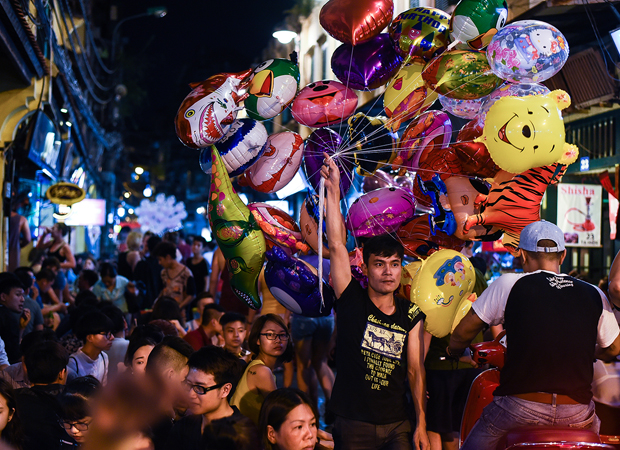 Often called the heart of the city, this lake is one of the most popular scenic spots in Hanoi. If you cross the iconic Huc Bridge, you may also be lucky enough to spot a few soft-shell turtles lazily swimming by.

Originally built in 1070, this temple was Vietnam’s first national university and is dedicated to Confucius, sages and scholars. It is comprised of old stone courtyards which are lined with meticulously trimmed gardens and bountiful lotus ponds. Upon the altars to Confucius you may, as I did, ponder on the boxes of cheese wafer offerings. Entrance is free.

While this may have been voted the “sixth most ugly” building in the world by CNN International in 2012, a visit to Hanoi won’t be complete without stopping by this landmark piece of Vietnam’s history.

/ This is a story written + shot by Anne Berry in Hanoi, Vietnam / 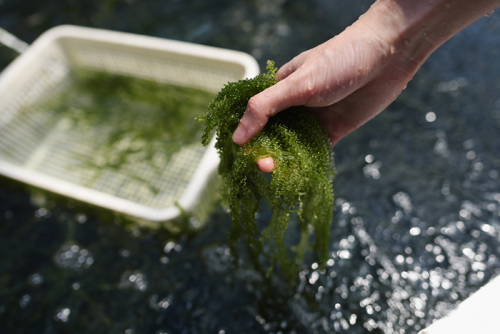 Okinawa is composed of dozens of islands that lie squarely in between the island nations of Japan and Taiwan, and has long drawn in curious travelers to its crystal clear waters, primeval forests, and well documented population of centenarians. Although marketed as the Hawaii of Japan, the islands w… 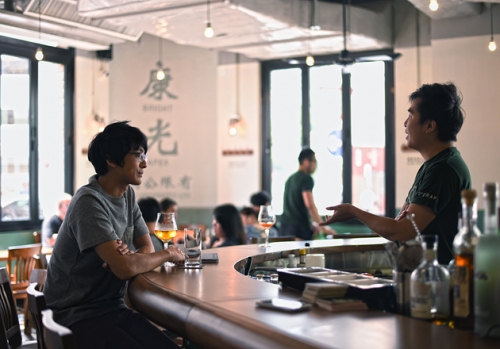 Anne Berry took the chance to meet up with James Ling of ’The Ale Project’ and ’Second Draft’ in Hong Kong to find how he manages to keep his business sleeves rolled up, while getting elbow-deep into the malts and hops of beer-geekery with curious customers. 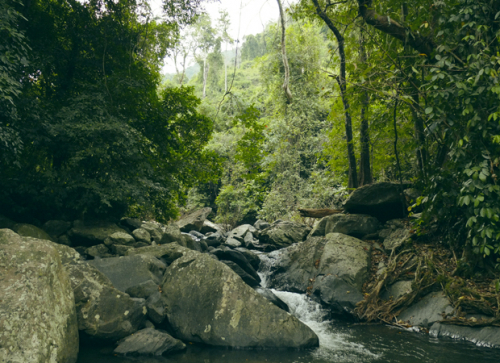