We are in a moment of rapid change. I’ve watched the way we behave transform in a matter of moments, while anchoring my feet into the sand in protest of change – but of course, I too am a 22nd century lady. Heck, the internet made me and dictates how I live my life! It’s a bitter-sweet relationship that pokes me everyday to remind me it’s still there [pun intended Facebook users]. So what have we experienced in 2015 that has already projected the way we will behave next year? I’ll take a look into symbiotic worlds, from our internet life, to table manners, to how we do business, and of course the zombie apocalypse will be covered. By reflection, we project.

Let’s start with the most exponentially powerful force of our era, the internet. It has most definitely defined who we are and how we exist. I have seen developing countries embrace it in more ways than we have in the west, and it has for sure improved the living quality of many. In Thailand, smartphone and tablet usage is absolutely huge. In January this year, the country had recorded an insane 97 million phone subscriptions according to We are Social statistics. Let’s look at what non-profit organisations have been doing with all of this smartphone usage. One fantastic outcome has been in app development: soil mapping apps are helping Thai rice farmers with failing crops, whether they be over (or under) compensating in essential nutrients. So now, a totally accessible second opinion is ready to help struggling people who were once feeling around in the dark. I don’t need to explain how great technology can be, because that’s a never-ending discussion, but I’m quite interested in how it has affected our social behaviour.

As smartphone usage skyrockets, I find myself holding back from too much eyeball-to-screen engagement. The idea of ‘coolness’ has changed in a poof of pixelated smoke. Now, the super cool chick at school who walked around like she gave no fudge brownies, is taking waay too many selfies during class-time to be taken seriously. I have found a disconnect with the online persona vs IRL (in real life) where we see much unfulfillment and a struggle to be content with one’s self. The internet has bred a new sense of ownership and entitlement amongst people too. Yes, the world wide web is a network based on sharing information, but some of us forget that not everything in life is yours to have. [ Sorry, no one is getting my auntie’s secret cheesecake recipe that I swore to secrecy. ]

Another profession of the moment, fashion blogging, is an interesting thing to look at. There are an exploding number of ‘personal style blogs’ because we all want to be the new internet cool kids. Yet, many have become customer service centres and factories that reproduce trend in every flavour possible. The concept of style has twisted into something far from its original meaning, and personally, you won’t find me reading chain-store catalogues in my spare time. We have forgotten that the coolest cat on the table is not the one snap chatting every moment possible, in fact he or she doesn’t even have their phone at the table because it’s just plain rude. We are experiencing a bombardment of ‘stuff’ but at the same time, we are consuming it at light speed. As we know, faster consumption also means more useless debris floating about cyber space. I’ve watched magazines struggle with the demand for more online content, and writers crumbling under the pressure of writing more ‘page view’ pieces rather than articles worth the read. So what is the result? More information you’ll forget faster, and a lot more cyber junk. [ Yes, this all sounds quite negative nancy but just hold in a little more ].

The same can be said in the music industry, as they are undergoing the same anxiety that comes with a demand for more music in a shorter amount of time. It’s not enough to make just one album a year anymore, and artists are using all sorts of tactics like dropping surprise albums to generate more hype than before. Sadly, this only works for your Drake’s or Beyonce’s who are massive enough to make some kind of headway but for the smaller guys, the truth is that pressure of creation has become a titanic force. More cyber junk floats around the stream… So with every movement comes some kind of anti-movement right? Let’s look at how record stores are doing incredibly well out of all this, and how people are queuing for 6 months to get their album pressed by inundated vinyl pressing plants. We have actually bred a more informed consumer, who seeks out connoisseurship, and THIS is how we are redefining our 22nd century idea of luxury.

We’re long past folk, and finally the idea of being a hipster is tiring, so what does that mean for business? The idea of trend is finally taking it easy and to me, 2016 [ the future rather ] is about doing things with good intention and solid values. Out of all that internet debris, we can smell good things from a mile away. Luxury has shrunk back into its beautifully inconspicuous form, and it’s being created mindfully …because the zombie apocalypse is totally on its way, and we have to shape up our dated idea of fulfilment – no, life’s not about getting rich folks. Don’t believe the zombies are coming? Just google the ‘superbug’ bacteria that is coming out of China thanks to our poor farming practices to supply an insatiable demand for protein.

So we continue to celebrate businesses with strong ethical values, who are dictated by a love for existence, rather than the bottom line. Our friends that we feature here at the Journal, like Revision Society who are seeking to change inefficiencies in the garment industry; or If I were a Carpenter. [ pictured below ] who are making ultra slick objects out of salvaged Thai timber for businesses and homes around Thailand; or Lyn and Tony who make beautiful handmade objects that remind us of the Earth or wild pieces made from up-cycled denim; New Zealand skincare label Triumph & Disaster who focus on their environmental impact on the planet, and of course our buddy Nigel Cabourn who supports local [British] manufacturing and the highest quality garments that you could ask for. The thing about seeing a future to our existence, is a consciousness of time itself.

So in 2016 I look forward to the anti-movement. I think we’re beyond the honey-moon phase of singular dimensions like Instagram, and we are hungry for honesty. We know that coolness is not something we can fabricate, and that good practice will always triumph over fudge. I look forward to more people who are enriched with information, more face-to-face moments, and enjoying the experience of living two parallel worlds in separation of each other.

Shot at If I were a Carpenter.
Showroom & Studio
Pridi 42 Yaak 12
(Sukhumvit 71)
Bangkok

We all are responsible for our destiny through our many little choices that in fact set us on a future path, a trajectory, if you like. The founders of (re)vision society are thinking in a way that could transform manufacturing and the future of industry into a much more efficient, and realistic model. So we went to see their entire design and manufacturing process to get an idea of how it all works and how the system is bound for collapse. 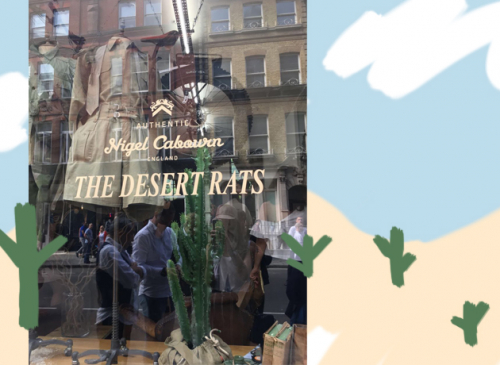 The London Collection Men’s show is the gun shot welcome to a new season by the home of Authentic British Menswear that is Nigel Cabourn. Mens and Womens sit side by side; the story of the British field army during World War II rubs shoulders with inspirational force American war photographer Lee Miller. Come backstage with us for the SS17 presentation featuring all our friends.

On the road, it can be easy to make excuses to sleep in just that little longer, but sometimes an early run or sunset power walk can be an incredible way to experience a new city. So, during Paris mens fashion week we asked our favourite designers, models, and power ladies to show us how they feel the burn on the road.