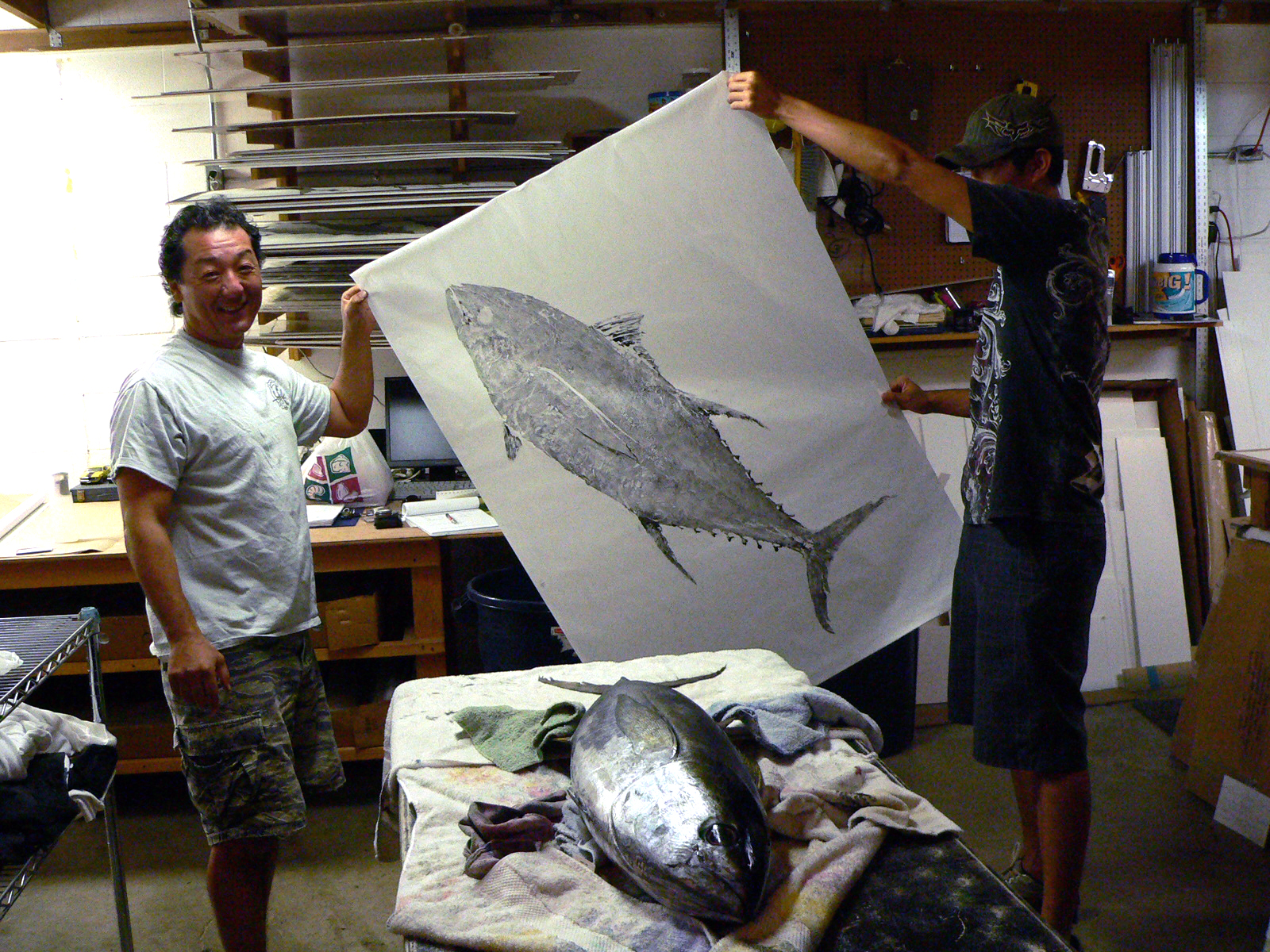 I had always admired the work by Naoki Hayashi who creates beautiful life-size stamps of dead fish using the Gyotaku method. His waste-not values,“ catch it, print it, and eat it.” His work that resonated with the overfishing crisis in his hometown of Hawaii got me looking deeper into the world of Gyotaku. 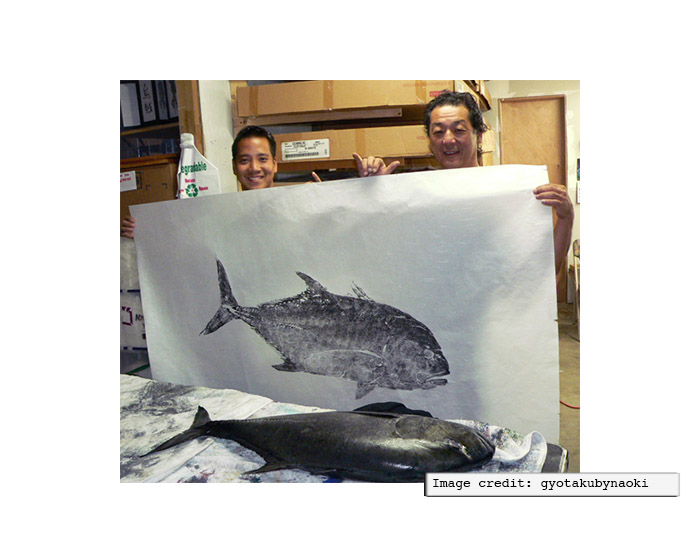 Gyotaku began in Japan in the mid 19th-century on board fishing boats. It was way for fishermen to record their trophy catch. As soon as a prized fish was caught, the fisherman would brush a non-toxic black ink called “Sumi-e” onto one side. The blackened fish was then slapped onto a piece of rice paper becoming a life-size stamp. Once printed, the fish was given a rinse to remove the ink. Live fish were released, while the rest were sold at the market for eating.

The popularity of Gyotaku printing grew for it gave the fishermen bragging rights to their biggest catch specimens were used instead of live ones that would otherwise flap about the page. The technique became more diversified! To bring the image to life, fishermen added details of the eyes and colors to its scales. The fishtail was bent to create the impression of it swimming in the paper-y habitat. Sometimes different types of fish or other marine species like octopus, squid or seaweed could be spotted in the painting.

With a deeper understanding of Gyotaku, I decided to get a first-hand experience, while following the waste-not values of Hayashi. Homebound with limited supply, I used the sea bass in my fridge and grounded up charcoal to create natural ink. The process of slowly brushing ink over the sea bass body felt like a ritual. Its staring eye brought me an unexpected sense of guilt. The fishiness that used to smell of freshness somehow now accompanied by the stench of death. The whole time I thought about its journey from the sea to my table. With printed and left to dry, I finished off the process by cleaning my bass and cooking it.

Though my makeshift process was nowhere near the traditional method. It had nevertheless given me a deeper appreciation for Hayashi’s interpretation of this age-old technique. From recording technique to art, his work shows a deep and complex value system, based on compassion for life and existence. 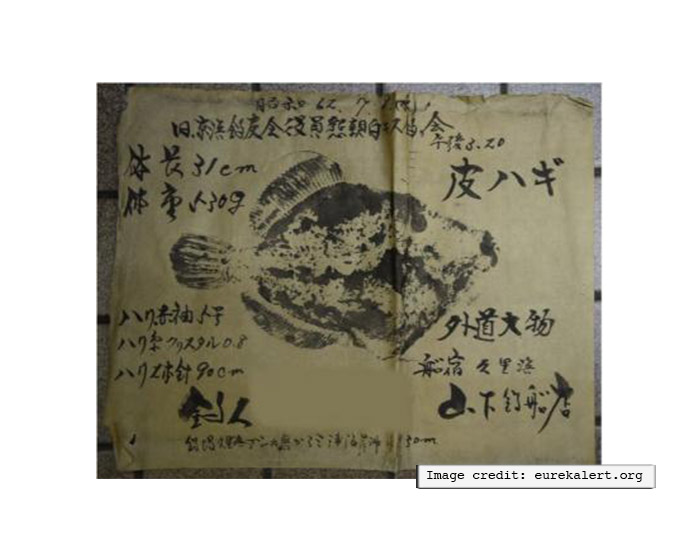 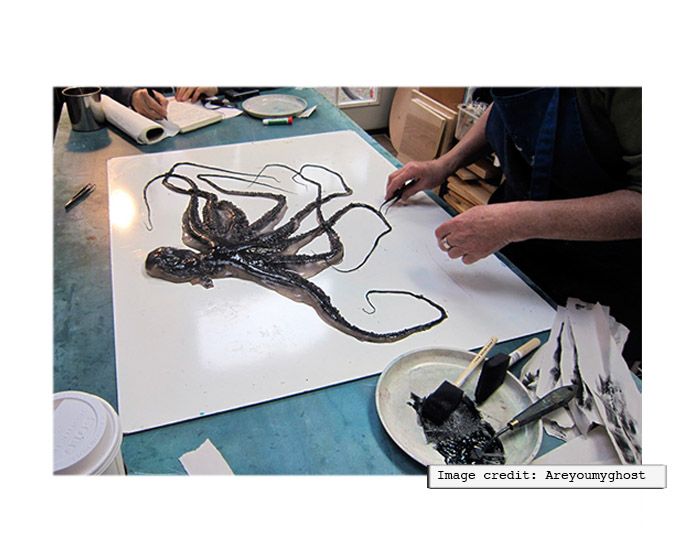 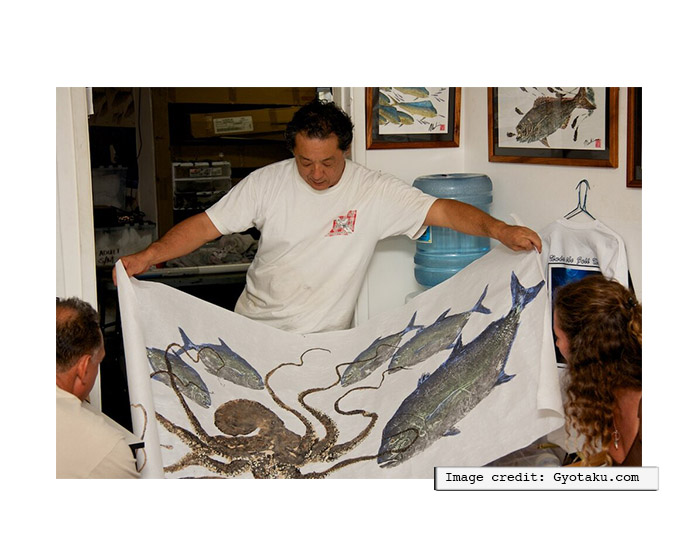 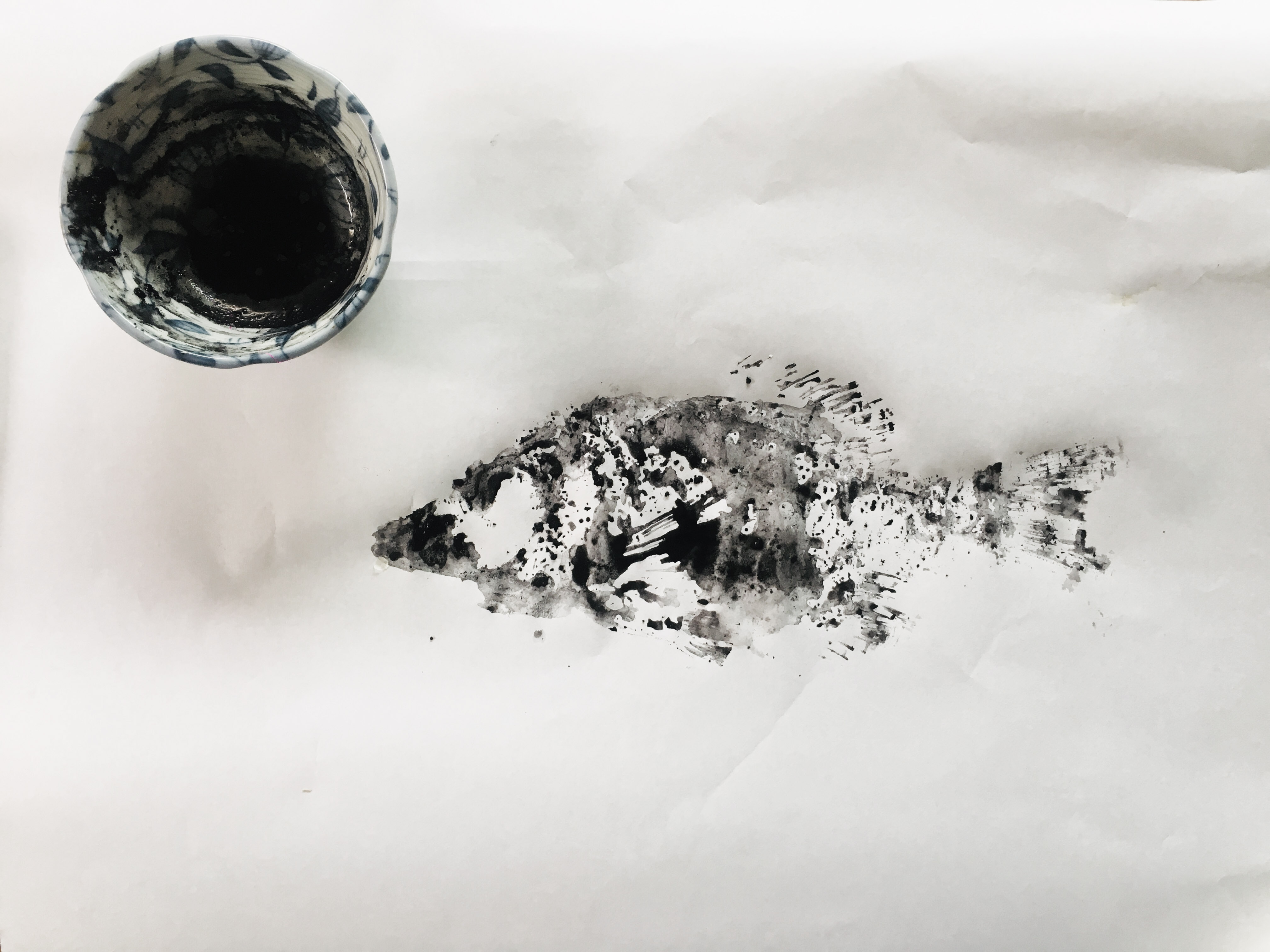 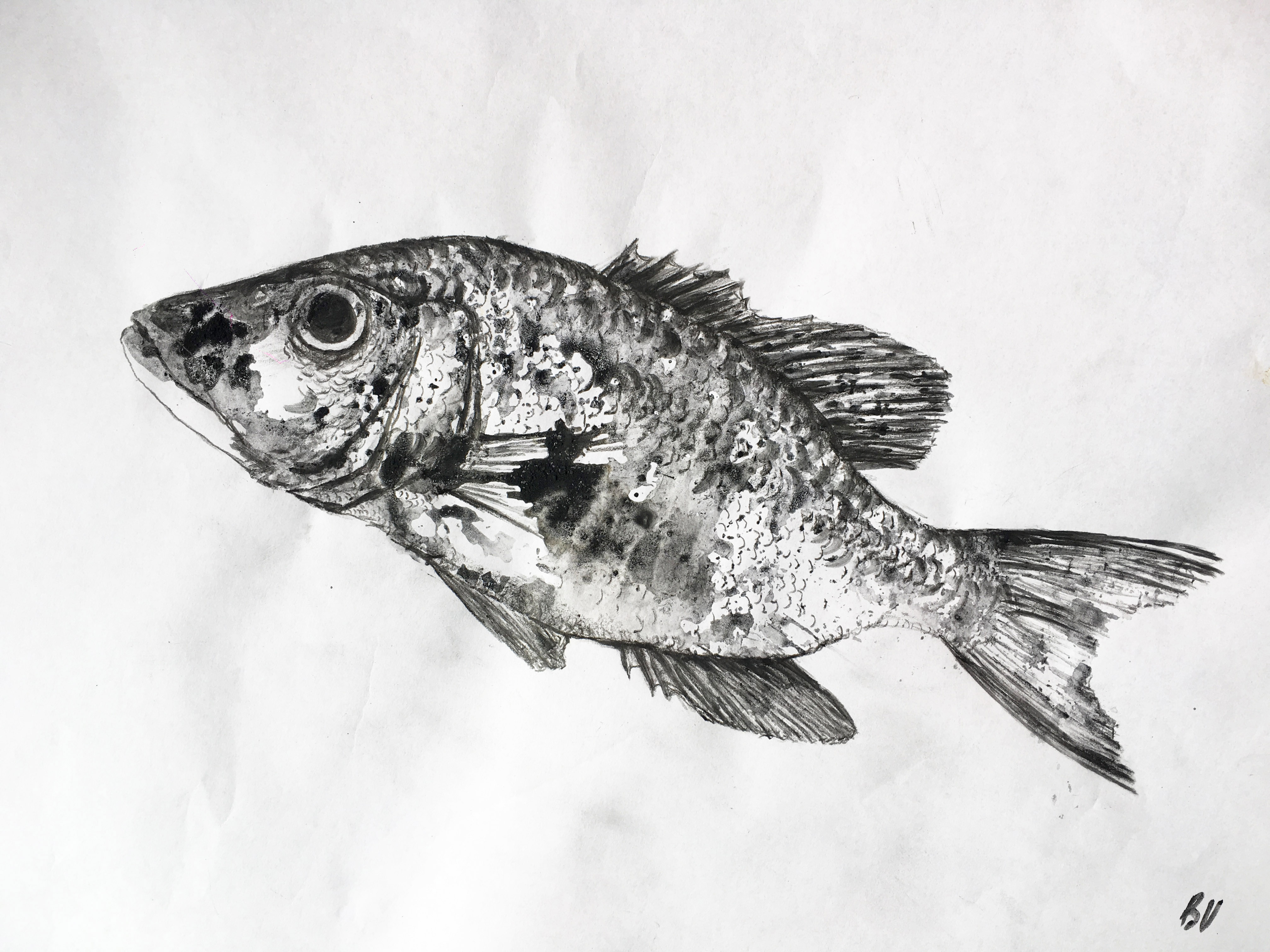 By Buranee Soh with a BIG thank you to Lauren for invaulable input as alaways. 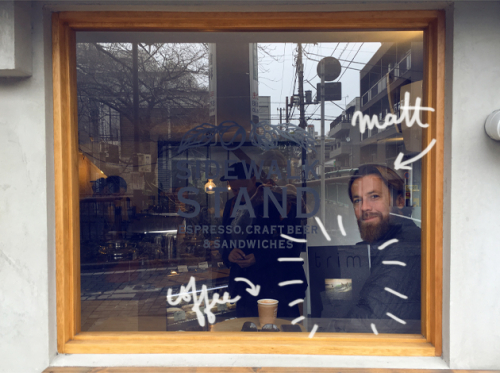 Matt is the editor of Trim, a beautiful surf publication from sunny Hawaii, so travelling between Japan and the Pacific paradise, he has latched onto a wonderful way of being. In his magazine, you’ll find great archival imagery of early indigenous surfing all the way to some superb boards shaped by water spirits who have found passion in craft. We asked him a few things about what floats his boat 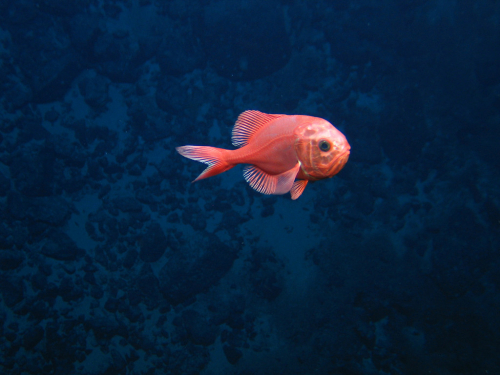 A Cautionary Tale of the Orange Roughy
Out friends Fish Thinkers collaborate with the NSW Department of Primary Industries in Australia to monitor fish stocks for conservation. Not only do they produce the most incredible videos in the name of science, they are unbelievably beautiful and we love them.