A few weeks back I had the absolute pleasure of shooting with team Kapital for their upcoming campaign. To say the least, I would sum it up as a week of rising in darkness, herding stubborn models, making cardboard props with new found friends, a lot of stupid jokes, a lot of delirious ranting, many bottles of beer, epic Thai lunches, more epic Thai dinners, kick boxing, go-go bars, angry whisky, and karaoke in strange places. Apparently these are the essential ingredients for catalogue awesomeness. You know what, I would strongly agree. After a lot of observing, I would compare this shooting experience to none other. Maybe it’s this crazy sense of kinship, love for denim, and understanding of what the brand stands for, that give Kapital campaigns an unexplainable sense of romance.

Being the nerdy little onlooker, and ‘jingle-bell’ (as in, Jack of all trades) on set, I’ve come to conclusion that goodness comes from fun. This is just more data to further support my hypothesis. To play is to create, and to share is to broaden your mind. Team Kapital are some of those folk who open themselves up to the beautiful chances and possibilities that our Universe throw us, and in the case of photographer and Ponytail pal Eric Kvatek, chances are like sparks for starting fires. He’s a kid with an evil streak but ultimately an incredibly kind hearted dude who is one of the best photographers I’ve come across in yonks. To be a photographer is really like playing a big game of snakes and ladders, where problem solving is a super valuable skill. You’ve gotta keep your cool on set while dealing with a million and one people, all with their own agendas, as well as models who like to float off set like the ghosts on pac-man (if you’re too young to know what pac-man is, woah… just google it I guess). Not only does Eric do all the location scouting, people managing, shooting, schmoozing, and all the rest, he usually has to do this in the craziest landscapes like the Mongolian dessert, or sailing off the islands of the Phillipines. It sounds glamourous, but roughing it is an understatement at times. What this guy takes on is something that his mama should be proud of.

As for Kiro, he makes jeans. Yes, he makes some of the rad-est jeans on this planet if you ask me – and no, I haven’t been slipped extra cash to kiss butt. All that wonderful detail like damaged and repaired garments, womenswear that makes you feel float-y, and bandanas that are screen printed with vintage Japanese pornography is what make Kapital, Kapital. To me it’s bringing beauty out of history, telling stories from motionless objects, and finding inspiration from dark, dusty, forgotten corners of the Earth. We would share an appreciation for grandaddy textiles, those pieces that took lifetimes to weave, ending up on market tables during war (read about ’em here). Yet, like most people I meet who have creative juice flowing out of their ears, the word ‘play’ doesn’t stray far. That’s why working with these guys is such a joy, and no doubt the outcome is wonderful weirdness that expresses beauty, silliness, and elegance all at the one time. Confused? Just wait ’til you see our adventures in Fake Vietnam come out in April. IM SO FREAKING EXCITED TO SHARE IT WITH Y’ALL.

Read about how the beauty game on set went down here. 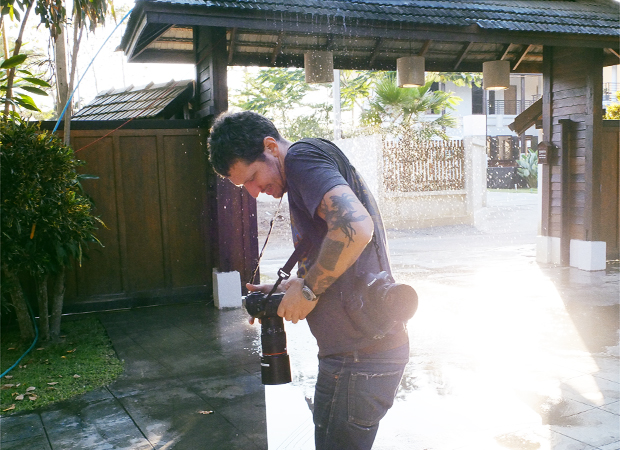 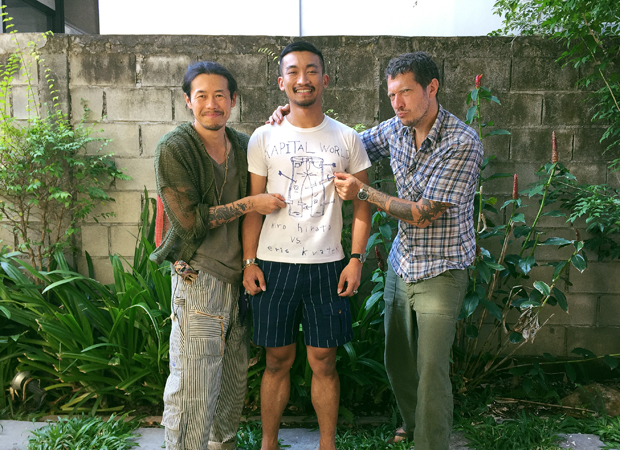 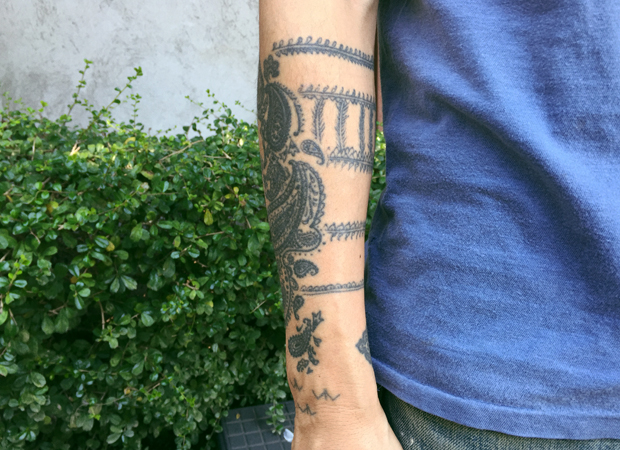 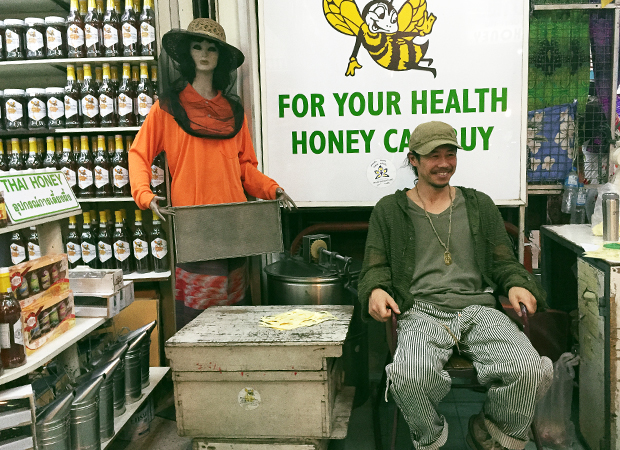 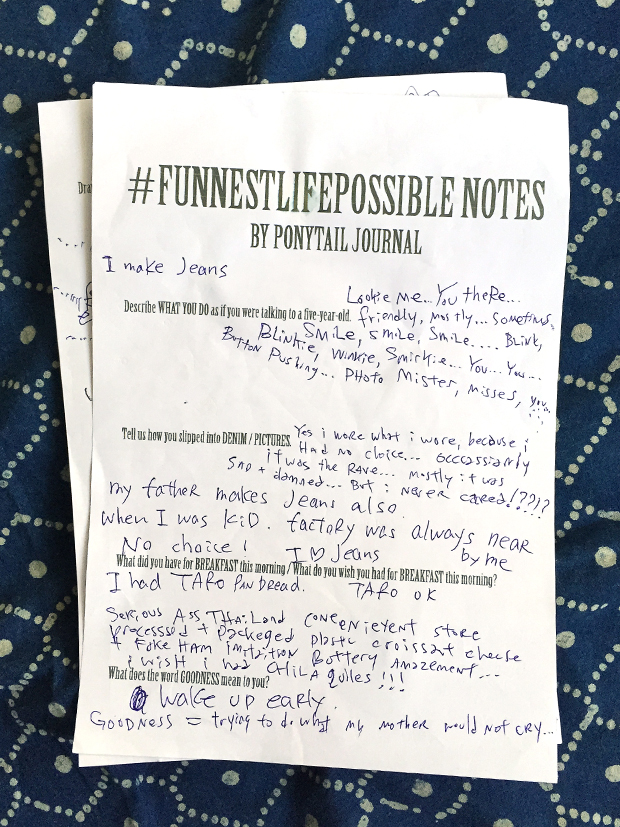 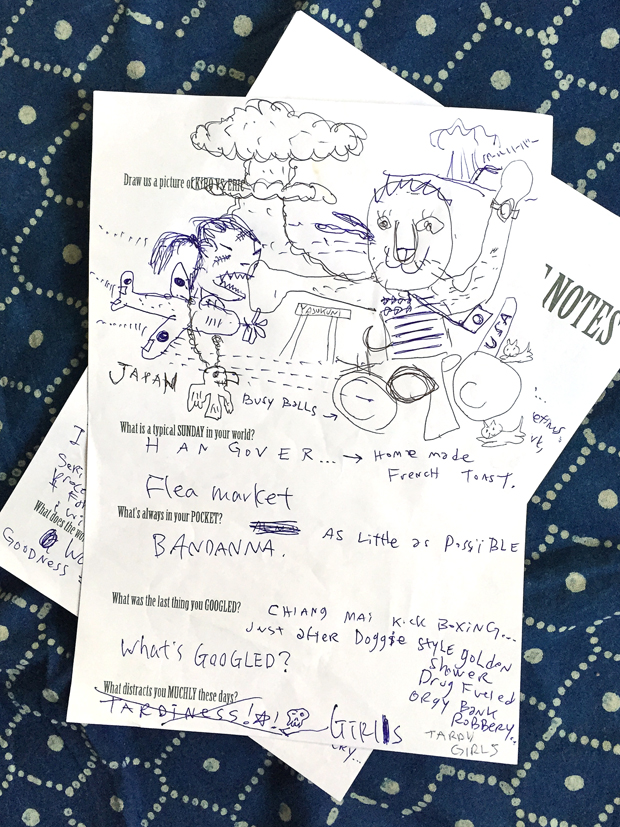 Eric: Lookie me… You there… friendly, mostly… smile, smile… blink, blinkie, winkie, smirkie… you… you… button pushing… photo mister… misses, you… [Eric, your brilliance in poetry leaves me confuzzled at best].

Q/ Tell us how you slipped into DENIM / PICTURES.

Kiro: My father also made jeans when I was a kid. The factory was always near by me. No choice! I love jeans.

Eric: Yes I wore what I wore because I had no choice… Occasionally sad and damned… But I never cared!??!?

Eric: Goodness = trying to do what my mother would not cry…

Q/ Draw us a picture of KIRO vs ERIC.

Eric: As little as possible

Q/ What distracts you MUCHLY these days?

Tardiness!! [then crossed out to be replaced with ‘girls’ and an arrow pointing that-a-way] Tardy Girls. [we definitely had an issue with late rising models on set that week… grrr….]

We’ve just made new friends with The Mercantile, internet newness that speaks to a slightly more feminine flavour of w’menswear to the table. The store together hand selected vintage pieces from California alongside modern basics and interior accessories designed by the founders themselves, and we bring you favourites from their latest vintage drop.

When you’re a digger, you have a sixth sense for goodness, even when it’s completely rusted and hidden under a pile of neglected... 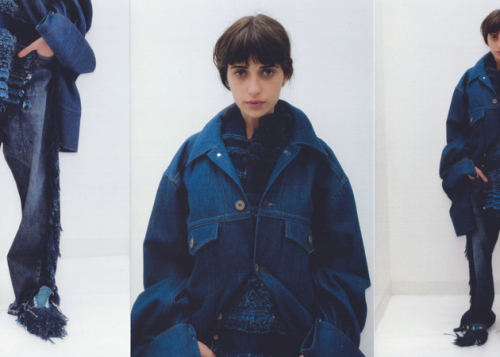 Matthew Dolan made a new food-group everyone. He shredded his classic American sandwich up into strips, wove it into a rainbow cake and when you bite into it, you burp unicorns while farting sparkles. The sum of its parts made a whole new thing. It’s workwear for women at its highest evolution.