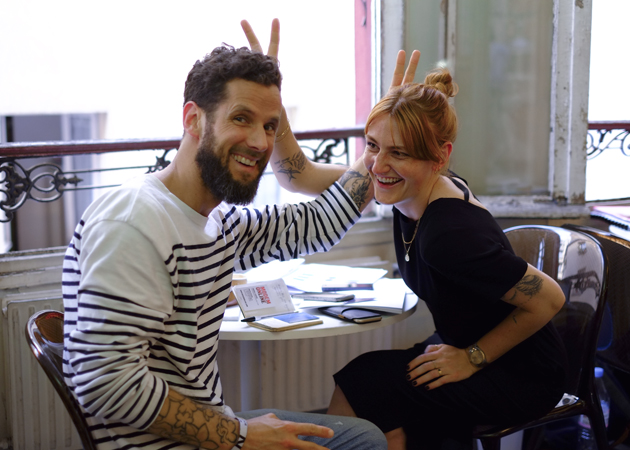 Elza and Joost of Atelier de l’Armee speak our language. They are the breed of folk who enjoy well made objects that test the truth of time, and enjoy the pockets of fun that inspire us in life. Go to their workshop in Amsterdam and you’ll probably fall backwards looking at their inventory of deadstock materials, and vintage. In our world, bonding over great vintage military and workwear is an easy game, but what I find refreshing about dynamic duo Elza Wandler and Joost Doeswijk is exactly that – their ability to be so gosh darn dynamic from form to function, heck to the way they style their look books each collection. It takes a highly evolved human, or a fine match between two (sometimes opposing) minds to produce a product that speaks to people today while referencing greatness through history.

To produce something truly special today is difficult, and finding the right folk for your wares is a different ballgame. Sometimes greatness can get lost in the dust that clutters our daily feed. That comes back to my thought that the ability to be dynamic has value today than ever before. Thanks internet.

*When I look at Elza and Joost, a super friendly and always easy-going pair, I’m reminded of my grandma stressing the importance of yin and yang in the Universe. *There can’t be yin without yang too far away – Joost is really passionate about vintage military and workwear, and Elza wants a life guilded in gold (joking, but not joking right Elza?) so how could this not achieve harmony? It’s Universal maths right? It’s emergence theory put into practice. Together, they have an incredible eye for styling, details, and a super uplifting work ethic that transcends the clutter. In other words, goodness is wholesome, it’s well thought out, it has history attached to it, but isn’t afraid to try newness out for the heck of it. This is why their incredibly made bags are stocked by proper stores like Cultizm, Kapok, Tenue de Nimes, and many others who understand the value of slowmade things that have that special something else.

I asked the two some really important questions at MAN show in Paris last month and had a little sneak peak into their upcoming season colour ways and styles… Which you can’t see yet… But I’ll just say that it’s definitely a delicious Ponytail flavour. However, I can show you Joost’s really nicely worn in camo pack from their previous season. They have continued to make this shape over and over in new textures and textiles: truth that form and function exist in harmony. 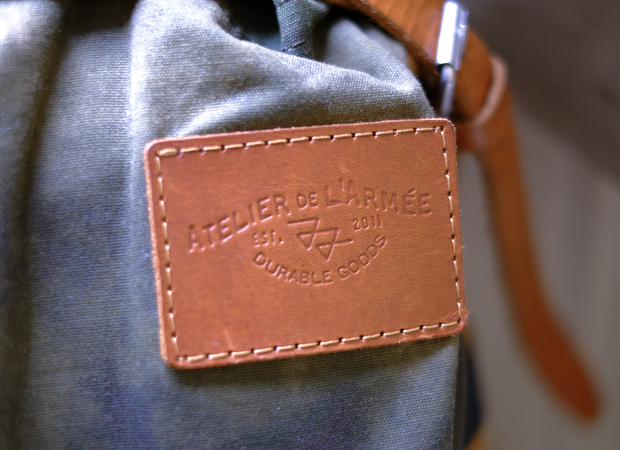 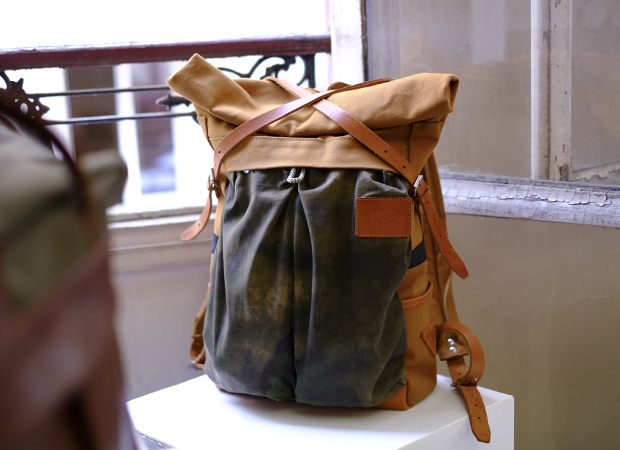 Elza and Joost on their funnest life possible:

1. What did you have for breakfast this morning?

3. Where would you escape to during a zombie apocalypse?

*Elza: Probably go to Bangkok ! [Me: Oh god! WHY? Bangkok’s so full of people! What if they all became zombies!] Oh yeah, that’s true [laughs]
*Joost: We will go to an island in Thailand. Yup, that’s smart. Zombies can’t swim. [Me: Zombies can’t swim, that’s right. It’s a fact.]

4. What’s the best thing about what you’re wearing today?

*Elza: My honest reaction is that I only brought my winter clothes and this dress is actually for the evening but I didn’t have summer clothes so I’m wearing this! [laughs] I didn’t really look at the weather and I only have long shirts and very wintery things!
*Joost: We forgot how warm it is in Paris, but I’m wearing my favourite jeans – Levies 517s. Vintage.

7. What’s the most special vintage piece you own?

*Elza: I have (actually from Bangkok) a vintage patchwork denim jacket which is completely filled with hunting patches. It’s really cool. [Me: Did you get that from Chatuchak?] It was from the vintage market, from one of the more expensive dealers there. It was a very cool jacket.
*Joost: For me it would be a Dutch miner’s jacket from the Netherlands in the 1920s, Moleskin. [So do you collect them?] Yes, I have about five or six colours.

8. What is your ultimate jacket button made of?

Joost: Aluminium. For me.
Elza: No… Pure gold. [laughs] [Me: Holy shit! That’s the most unique answer I’ve ever had for this question!]
Joost: That’s Atelier de l’Armee right here. That’s exactly the mix.!

9. What would you cook for your woman on a special occasion?

*Joost: Alright, I know it because there’s a special fish that I can make which she likes. It’s fish made with oyster sauce and yellow peppers, with tomato sauce. It takes almost an hour to prepare so that’s why I don’t make it a lot.
*Elza: And normally I eat everything. He only gets a little bit. For him, [laughs] I would order a pizza! I don’t cook [laughingly].

Elza: Yeah! We go exercising like three times a week before work.
Joost: We do yoga every morning – or at least four times a week and we exercise as well.
Elza: I hate doing the fitness stuff but I have to you know! 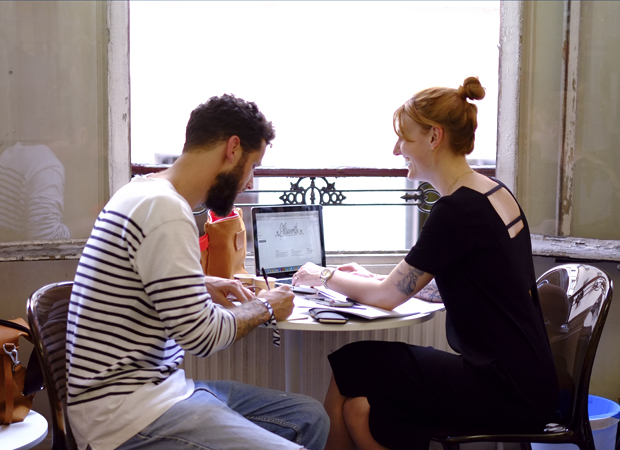 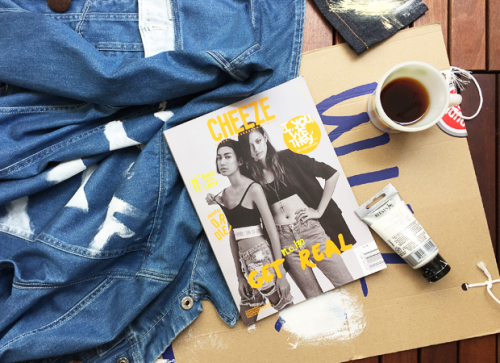 For Cheeze Magazine’s 11th Anniversary Issue, ’Get Real’, we shot some W’Menswear looks to celebrate great people in the world who embrace newness, respect the past, and are constantly pushing to better what already exists. Grab a copy now, and for those who can’t here’s a little glimpse of funnest-styling-possible in the studio for the issue 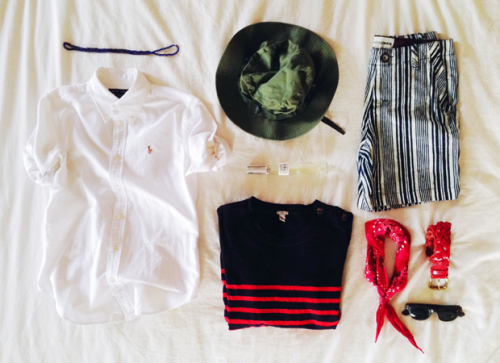 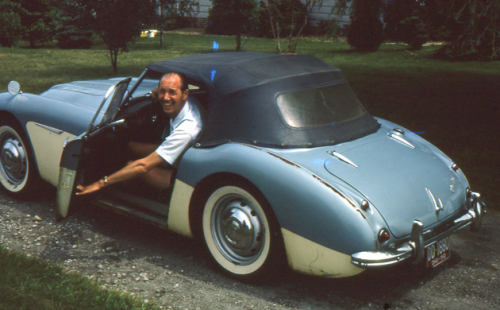 Welcome to a brand new segment, our Style Heroes. Don’t be expecting a bunch of same-ol-same-ol street style shots of fashion week posers, we’ll be focusing on great people through time who are an inspiration to the term ’style’. We begin with the grandfather of our pal Danny Lee, someone who was the epitome of a true gentleman